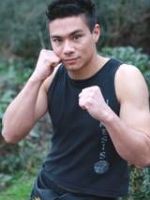 Chris has been part of Nemesis since he was 20. He had formerly trained with a neighbouring club, a relationship he still maintains at present. Chris has trained since the young age of 6 in a variety of styles including ITF Taekwondo (6-10), Shotokan Karate (10-12), Kung Fu (12-14), Kickboxing (18-present), and Thaiboxing (18-present). To further his education in martial arts Chris attended a Thai boxing school in Thailand which was run by two of Thailand’s most prestigious Northern Thailand champions. The trip gave him a fresh insight on his training and developed him into the fighter he is today. Many of Chris’s techniques can easily be recognized from a Thai boxing textbook and cross train nicely with Nemesis’s dynamic and energetic nature.

Chris has represented the club in a vast number of fights and has won his lion’s share of them using his energetic style coupled with dynamic kicks and determination. An enthusiastic instructor, and student, Chris can always be spotted at training with his hedgehog like appearance and Apollo Creed crop tops!. Chris is currently the WKA Professional under 75KG British Champion & Golden Gloves British Champion. In 2010 & 2011, Chris has won the WKA World Championships, and in November 2011,the Clash of The Titans, the UK's biggest martial arts team event as part of the impressive GBMAA Elite fighting team.

Chris Winning The Clash of The Titans