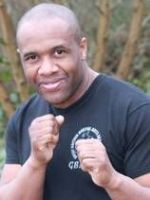 Peter was first introduced to martial arts by his father at the age of 11, as a way of developing self defence skills. Began with Wing Chung Kung Fu for several years before switching to Karate to engage in competitive fighting, Karate offered just that.

Until mid 1980’s when the whole arena of martial art sport really took off and light contact fighting become big, many traditional clubs pulled away from the new hard contact form of competition and it’s reliance on extreme fitness, fortunately his club moved with the times and developed an unbeatable competitive fighting team. Today, Peter Club founder, 5th Degree black belt and one of the three senior instructions at Nemesis Martial Arts Club, has won many titles, there are too many to list but here are a few of the highest achievements.

Won British & European titles FSKs, ISKA, EWKA, Super League, British Martial Arts Premiership, WUMA, BIKMA, National All Styles, and several invitational challenge matches. I still compete regularly today competing in both the Veterans & normal fight sections. My rule that I live by is 'beginning is easy, continuing is hard,' I live by this rule as so many people give up in all aspects of their lives when continuing becomes hard, I never give up, winning then becomes habit forming.

In 2016 Peter won Double British Titles (aged 52) at The WKU British Championships, and is preparing to head to Eire in 2017 for the WKU World Champinships in Dublin.